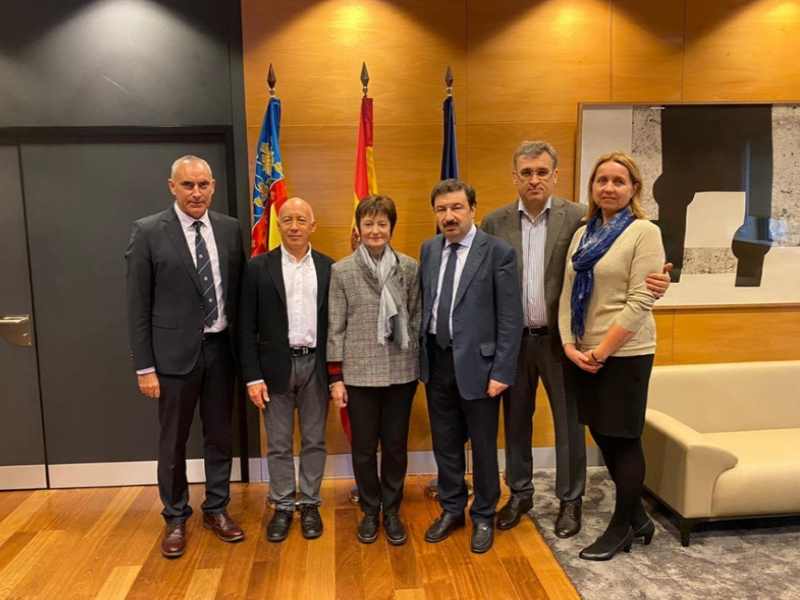 A group of officials from the Presidential Academy and the Russian Foreign Trade Academy (RFTA), a Russian partner in the Alliance of Russian and Spanish Universities, has visited the University of Valencia and Universidad Carlos III of Madrid (UC3M), invited by the two universities’ management.

The Rector of the University of Valencia, Mavi Mestre, and President of UC3M Juan Romo thanked their Russian colleagues for the opportunity to implement a unique joint project. They emphasized that the Alliance is opening up new prospects for international academic cooperation and contributing to building a single educational space that paves the way for civil dialogue between our countries.

The participants in this initiative use a creative and innovative approach, and are dedicated to the search for new formats of cooperation, joint project activities with EU funding, and joint events: conventions, conferences and symposiums both in Russia and in Spain. They also support student and faculty mobility through the Erasmus+ grant system.

The Russian visitors thanked their hosts for the warm welcome, for their optimism and faith in the project. They praised the outcome of the visit by deans and representatives of RANEPA and RFTA international departments to the four Spanish universities of the Alliance (the University of Oviedo, the University of Valencia, UC3M, and Rovira i Virgili University in Tarragona) in November 2019. The visit provided an opportunity for the parties to establish personal contacts between the departments and programs they plan to sign special exchange agreements and implement double degree programs with.

Warm personal relationships and friendships are the basis for success in any endeavors and can make them truly constructive and mutually beneficial, the parties agreed. This means the Alliance is developing successfully. Its participants are confident that it will further expand as new members will join – Russian and Spanish universities interested in developing synergies. This will help accomplish the goals of internationalizing higher education.

During the visit to Spain, the Russian representatives also met with the leaders of the National Institute of Public Administration of the Government of Spain and the Institute of Public Administration of Generalitat Valenciana (the government of the autonomous community). They reached agreements on the exchange of experience, joint scientific research, and internships for Russian civil servants in Spain as part of RANEPA training programs abroad.

The Russian delegation was received by officials at the Spanish Ministry of Education, Culture and Sports. The parties reaffirmed the success of the joint activities and specifically noted the effective support from the Spanish Embassy in Moscow. With the diplomatic mission’s support, RANEPA has been implementing numerous successful projects with Spain for more than six years.

Russia’s Ambassador Extraordinary and Plenipotentiary to Spain Yury Korchagin praised the Presidential Academy’s contribution to the development of Russian-Spanish relations in education. He highlighted the productive work of the two strategic partners, RANEPA and the University of Valencia, which offer the only double degree programs in Economics and Law available at the bachelor’s and master’s level. These programs are delivered by the department of international regional studies and regional management at RANEPA IPACS led by Dean Valentina Komleva.

Representatives of the Russian Embassy in Spain emphasized the particular importance and the contribution by the Russian-Spanish Center at RANEPA IPACS and the Russian Center at the University of Valencia, headed by Olga Pirozhenko, to the development of bilateral relations. Both centers are actively engaging Russian and Spanish students and teachers, promoting the values ​​of Russian culture and education abroad, and contributing to the strengthening of friendly ties between our countries.

The four-day visit was organized by the Secretariat of the Alliance of Russian and Spanish Universities and the leaders of RANEPA IPACS.