Vladimir Mau speaks at a conference on educational cooperation in France 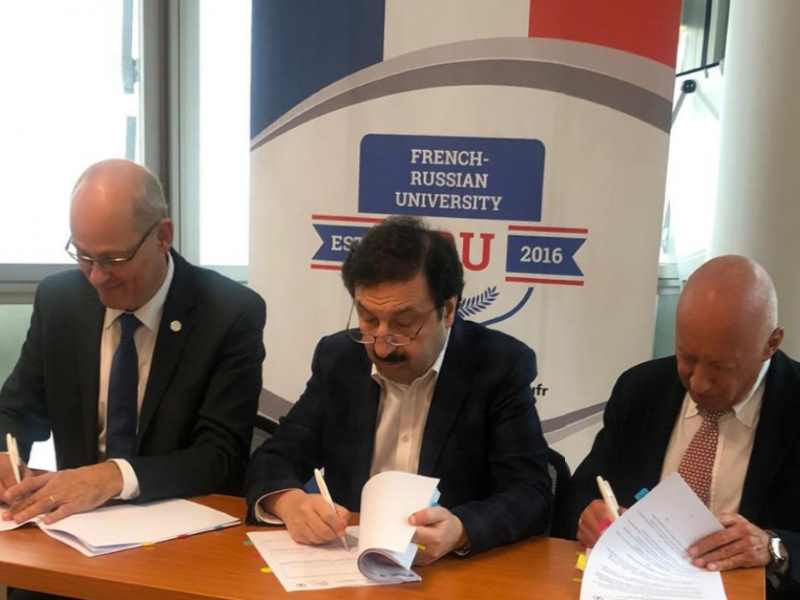 The 4th International Conference, Europe-Russia Science and Education Space: Looking for Effective Forms of Partnership, was held on October 31 in Paris, organized by RANEPA in collaboration with the Russian-French University (RFU), the Russian-French Center for Education and Consulting at the RANEPA Institute of Public Administration and Civil Service (IPACS) and the International Association of University Professors and Lecturers (IAUPL).

The conference participants discussed the creation of a common space for research and education, promising models of international partnership in the academic sphere, the difficulties encountered and the tools to overcome them, modern technologies in teaching Russian as a foreign language and other issues. IPACS Director Igor Bartsits who moderated the discussion invited the participants to continue exploring this topic as part of the 2020 Gaidar Forum.

Ambassador Extraordinary and Plenipotentiary of Russia to France Alexei Meshkov opened the meeting saying that our countries are implementing 170 double degree programs at various levels, and more than 5,000 Russian students are currently enrolled in France. On the other hand, the number of French students in Russia is extremely modest, he noted, and achieving a balance in this matter is definitely a priority. He praised the success of the Russian-French University: due to the network university format, it addresses complex educational and organizational issues and serves as a good platform for cooperation. The diplomat is confident that educational cooperation is an important part of the intercountry dialogue and a useful step in Russia’s relations with France and the European Union.

Rector of the Presidential Academy Vladimir Mau reminded the audience of the agreement on mutual recognition of diplomas signed with Spain last spring – the second such agreement Russia signed after the one with France four years before. The Alliance of Russian and Spanish Universities also officially began to operate this year. Vladimir Mau thanked the head of the Council of Europe’s academic network, Michele Nicoletti, the Russian judge at the European Court of Human Rights Dmitry Dedov, and Head of Human Rights Policy and Co-operation Department at DGI Council of Europe Mikhail Lobov for their support in organizing the conference and helping bring it to the pan-European level.

Our pace of life is getting faster, its nature is changing within one generation, and uncertainty is rising, the RANEPA rector said. So education must respond to that trend with greater productivity and fundamentality: rather than teaching skills – because you never know which skills will even be in demand in five years – it is important to teach the basics and lay the foundation, on which skills would be based. Vladimir Mau noted that in the coming years, machine translation will ensure effective communication in real time, which means that not speaking a language will cease to be a barrier to learning. We need to prepare for this change; so universities should become partners rather than competitors. Cooperation between universities is an important part of the Trianon Dialogue and a priority for each particular university, Vladimir Mau emphasized.

President of the University of Nice Sophia Antipolis Emmanuel Tric noted that Russian and French universities have been able to significantly advance in dialogue, and this success can and should be used to develop relations between France and Russia. In his opinion, the most promising track today is universities’ integration in the local socioeconomic infrastructure and their development as intellectual centers. Michel Gay, a professor at Lyon 3 University and General Secretary of IAUPL, is confident that exchanges between universities and faculty collaboration should expand. Universities contribute to the future, and this is their fundamental role, the French professor emphasized.

Mikhail Lobov noted that relations between Russia and France are not cloudless, so all formats of cooperation, including academic ties, are becoming increasingly important. Michele Nicoletti, in turn, highlighted the need to attract universities to cooperate with the Council of Europe in the formation of academic networks. Students and teachers can become Council of Europe ambassadors and prepare and amend conventions, helping build a single new world, he said.