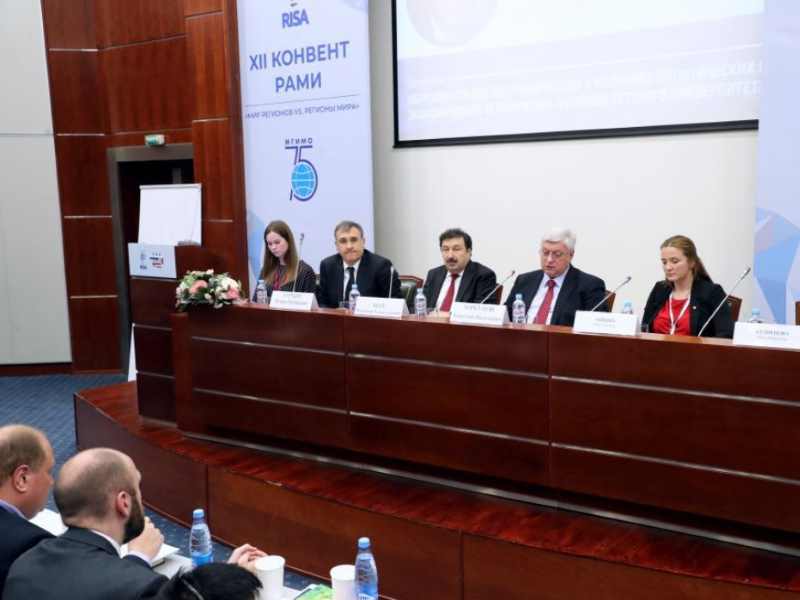 On October 22, RANEPA Rector Vladimir Mau took part in the conference, Academic Diplomacy: The Place and the Role of the Leading Russian Universities, organized by the Russian Association of Leading Universities and French-Russian Trianon Dialogue civil society forum.

Vladimir Mau spoke during the discussion session, “Educational cooperation amid political and economic constraints. Network university phenomenon”. He covered a range of aspects of the concept under discussion emphasizing that international educational cooperation plays a key role in upgrading international relations in the current political and economic context. Intensive globalization, according to Dr. Mau, increasingly promotes the development of cross-border educational cooperation. With the increasing global problems, there is an urgent need to create a unified pool of qualified international professionals to counter the new threats. Consequently, development of educational programs and training of modern generations of professionals is a task of paramount importance for partnerships of states.

Director of RANEPA Institute of Public Administration and Civil Service (IPACS) Igor Bartsits, who opened the discussion, noted that political and economic restrictions are “a sensitive topic for all parties that find themselves in an environment of misunderstanding”. That is why the possibility of a dialogue between the research and university communities becomes especially relevant. The moderator invited the panelists to share their experiences and observations.

MGIMO University Rector Anatoly Torkunov welcomed RANEPA emphasizing that both partnership and competition are equally important for the development of universities. In university diplomacy, which is a part of academic diplomacy, an important role is played by students – by young people already shaping the future in contact with their colleagues from other countries. “We are inseparable geographically, and everyone understands that cooperation needs to be developed”, Dr. Torkunov said. He described network universities as an innovative and very important concept. MGIMO participates in network universities of the CIS, SCO, and BRICS. The difference in programs enables participating schools to find the most motivated and trained students. Network research organizations are also of great importance; MGIMO, for example, participates in a project with ASEAN. Joint scientific research is also important for the development of educational programs, Anatoly Torkunov concluded.

Vladimir Mau wished all the best to MGIMO on the occasion of its anniversary – this year the university turns 75. “Only today I realized that MGIMO is a child of war, and that the past 75 years of peace have been largely the result of your graduates’ efforts”, the rector of the Presidential Academy said. Our two universities are good neighbors and partners, Vladimir Mau emphasized and invited all those present to their joint session as part of 2020 Gaidar Forum. In the current conditions, universities are not competitors, but partners, he underscored. And the main rivals of universities are consulting companies that open their own educational programs.

The RANEPA Rector also cited another challenge related to studying languages. According to him, in the coming years the situation will change dramatically, as machine translation will allow people to communicate successfully in real time without knowing a foreign language. Vladimir Mau also warned the participants from falling into the trap of the 21st century: excessive emphasis on soft skills, which many tend to overestimate as the foundation for development. But socio-psychological skills have always been in demand, even three hundred and four hundred years ago, and have dominated the intellectual professions. They are indeed important today, but only when they are developed on the basis of fundamental knowledge – hard skills.

At the end of his report, Professor Mau proposed the following criterion as an indicator of a university’s high level: its graduates finding a place in life where they become successful, because many are actually employed outside the area of their university degree.

The discussion was attended by, QS Regional Director for Eastern Europe and Central Asia Zoya Zaitseva; Children’s Rights Commissioner for the President of the Russian Federation Anna Kuznetsova, Ambassador Extraordinary and Plenipotentiary of the Republic of Malta to the Russian Federation Pierre Clive Agius; First Counselor at the Embassy of Italy in Moscow Walter Ferrara, Adviser on Education at the Embassy of Spain in Russia Javier Torres Hernandez; and First Vice-Rector of Russia’s Peoples’ Friendship University (RUDN) Nur Kirabayev.

The session on Educational cooperation amid political and economic constraints. Network university phenomenon was organized by the ASEAN-Russia Forum on Education and RANEPA during the conference, Academic Diplomacy: The Place and the Role of the Leading Russian Universities, held as part of the 12th Convention of the Russian International Studies Association (RISA Convention).