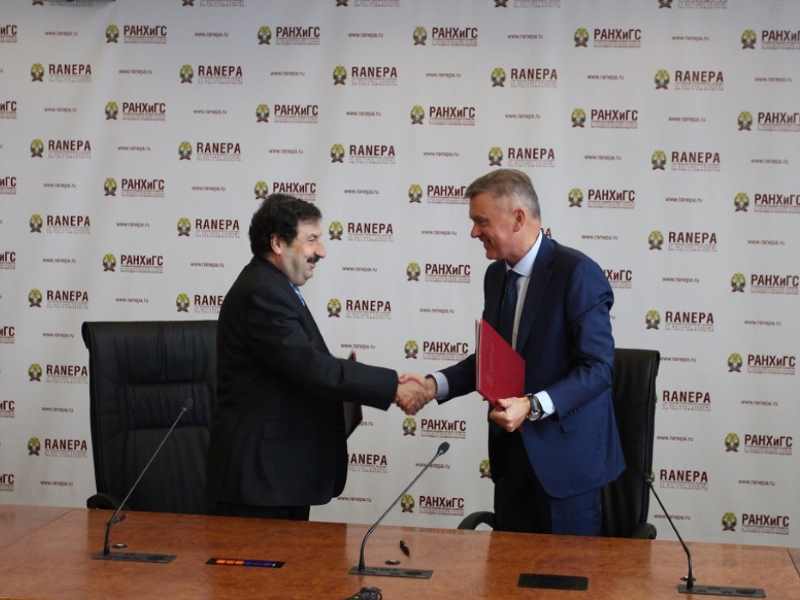 The agreement is primarily aimed at implementing their partnership, promoting law, studying mutual experience in improving legislation and building the foundation for a rule of law, as well as improving the general level of legal culture and legal education. The parties agreed to organize continuing education programs and implement projects to develop and promote Russian legal education both in Russia and abroad, in particular within the framework of international legal educational institutions, as well as to develop and implement joint projects as part of the Gaidar Forum.

Speaking at the ceremony, Vladimir Mau said the school’s cooperation with the FNC has a long history and this agreement is a very logical step. “All of us here in this room, including representatives of the legal community, understand the exceptional role of notaries in Russia. I am glad that at last we have achieved this result of our cooperation, and will legalize our relationship today”, the rector said.

Konstantin Korsik noted that law schools play a decisive role in the training of future lawyers: “Digitalization is one of the tracks of state development, and my colleagues and I strongly advocate the use of high technologies in the training of future lawyers”. Director of RANEPA Institute of Public Administration and Civil Service Igor Bartsits added that this year, IPACS opened a new undergraduate program, Legal Support of Financial Technologies, abbreviated in Russian as PROFIT. “My colleagues and I capture the trends and requests of the legal community to train highly qualified specialists with extensive digital knowledge”, he said.

Vladimir Mau also suggested considering the idea of ​​creating a notary department at the School of Law at RANEPA IPACS. Dean Oleg Zaytsev enthusiastically supported the initiative: “We have a department led by Chairman of the Supreme Arbitration Court Veniamin Yakovlev, which implements a range of educational programs at all levels. There are already several hundred graduates holding leading and important posts in the public and private sectors. The importance of legal education has been mentioned several times today – my colleagues and I are proud of our school’s level and will eagerly begin working on the rector’s idea”.