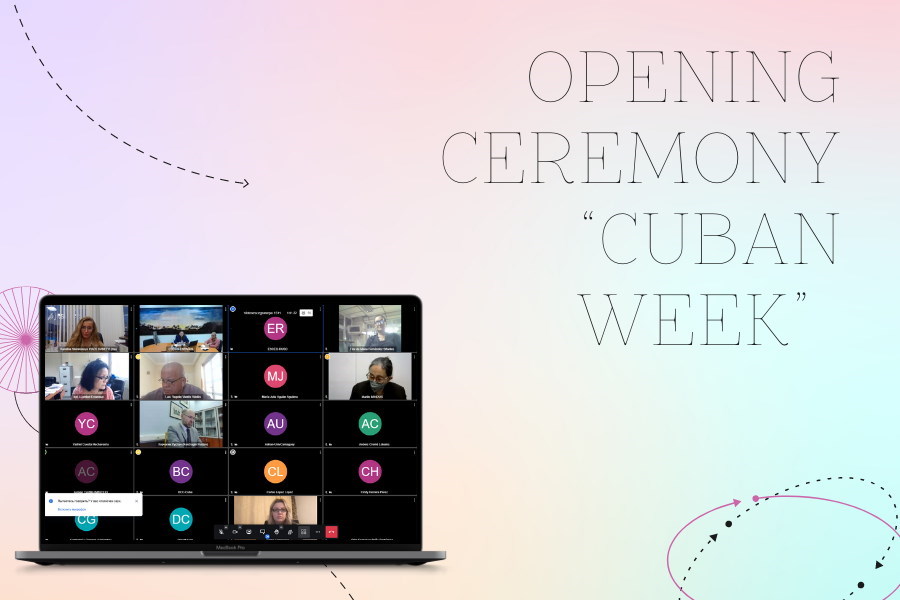 On 15 November took place the opening ceremony «Cuban Week» at the Institute of Public Administration and Civil Service RANEPA.

Karolina Sikirinskaya, Head of the International Cooperation Department of IPACS RANEPA, welcomed the guests in Spanish and expressed her gratitude for participating in such a large-scale online event: “I would like to express my enormous gratitude to our colleagues for jointly organising such a large-scale event. Today, more than 100 Cuban trainees from various regions are participating in the event, so our initiative can be called a great success! All our meetings have a particularly friendly format, so I am sure that our cooperation will continue and that relations between Russia and Cuba will be strengthened in the future!

Mercedes Delgado Fernández, Rector of ESCEG, also thanked those present and noted that our states remain partners and friends throughout the long history of cooperation and will continue to flourish!

RANEPA Vice Rector – Maxim Nazarov, spoke about the importance of the educational bridgehead, scientific cooperation between the two countries and mutual interaction. In addition, he noted, that today the cooperation between Russia and Cuba is actively moving forward. Recently an intergovernmental meeting of the Ministries of Higher Education of Russia and Cuba was held and the ministers noted that cooperation in the field of education is the main vector of the partnership between the countries.

Ruslan Korchagin, Acting Director of IPACS RANEPA, also expressed his gratitude to his colleagues and noted the importance of the development of the digital state.

Then, for the participants in the «Cuban Week», the first seminar was held on “The Digital Economy of the Russian Federation”, the speaker being Elena Eromaleva, PhD in Economics, Associate Professor at the Department of State Regulation of the Economy at IPACS RANEPA. In the near future there will be several other important seminar meetings which will reveal the main agenda of the «Cuban week».